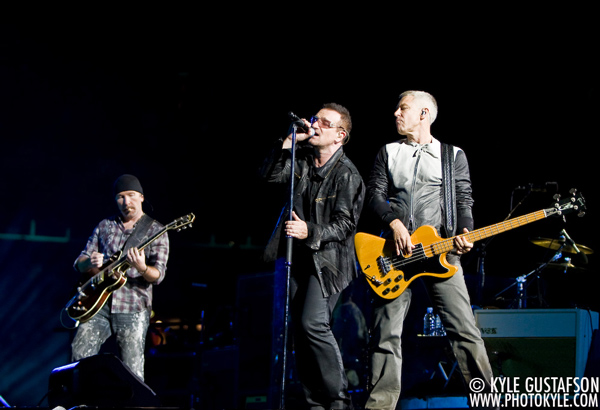 Even though I would not call myself a big fan of U2, it was still a special treat to be able to shoot them when they played their D.C. area date on Tuesday at FedEx Field. It’s not every day that you get to shoot the biggest rock band in the world. 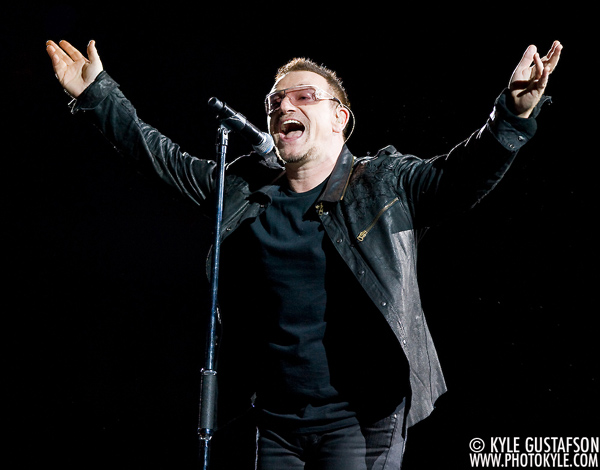 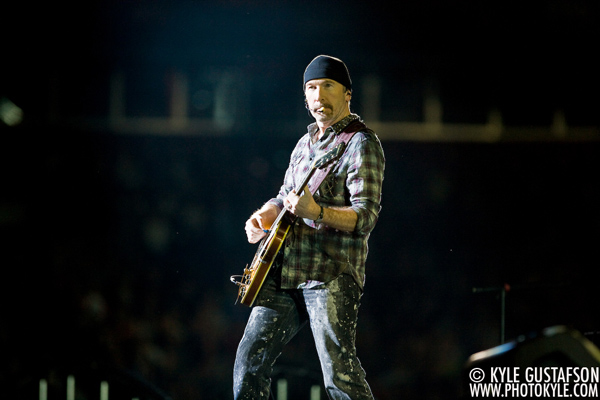 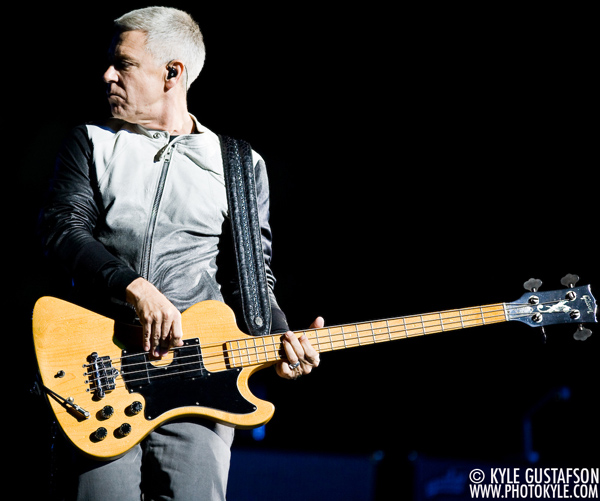 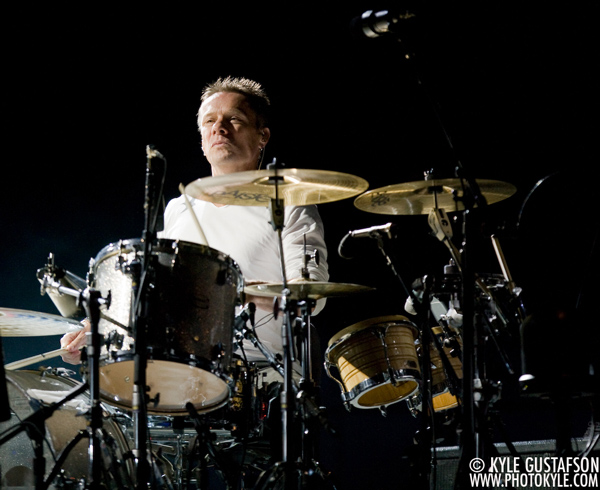 I was pleasantly surprised at how nice the band treated the photographers at the show.  No release to sign, no soundboard shoot, nothing silly like that.  They stationed us in the small space in between the first GA pit and the walkway that extended from the stage.  They even let us stand on the steps attached to the crowd barrier, not something most bands will let you do.  This gave us a decent sight line to the stage. 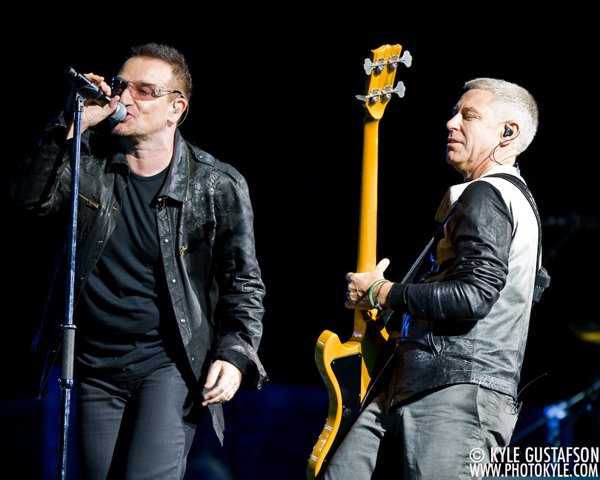 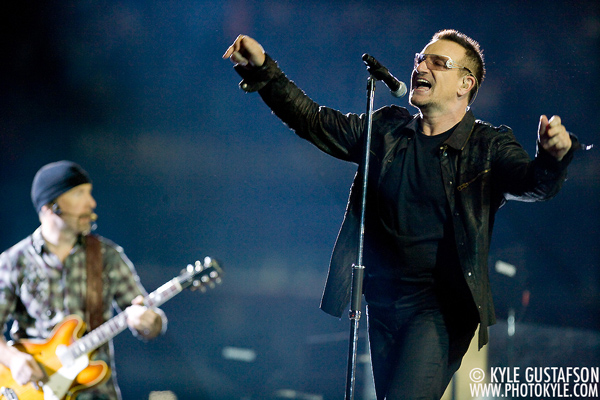 I shot the gig with two cameras, my 1Ds Mk II with a 300mm/2.8 and my 40D with a 70-200mm/2.8, which gave me a pretty good zoom range of  about 100mm-320mm (given the 40D’s crop sensor).  The 300mm/2.8 was a tad tight, I really could have used a 280.  There were a few shots where I had to cut off hands or the ends of guitars. The downside of the being able to stand on the barrier steps was that the other photogs didn’t move around once they got their spot.  So I basically had the same point of view for our allotted three songs. 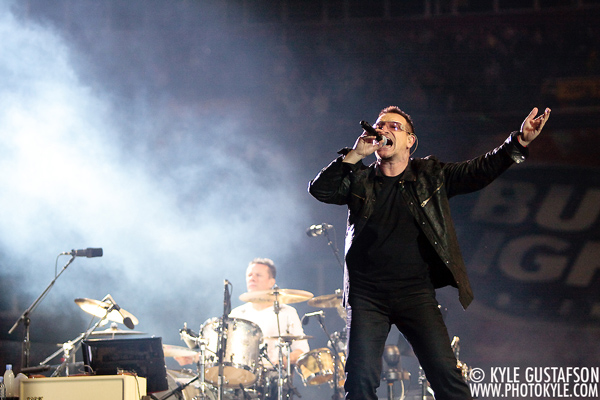 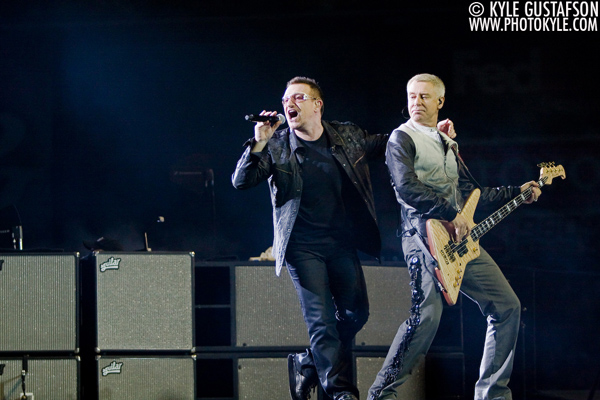 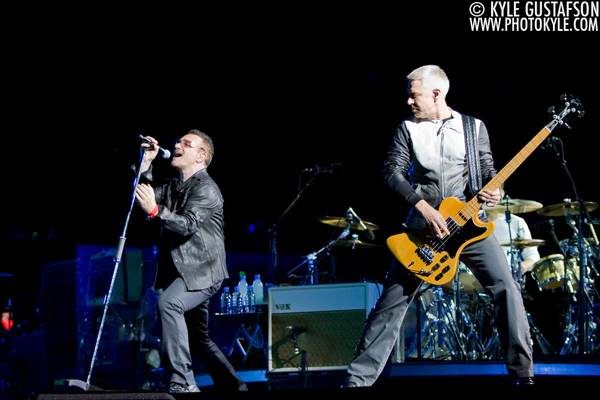 Lighting was fairly good, mostly spotlights on the individual band memebers.  The mood lighting didn’t start until later.  Since the tour is in the round, there was no stage back drop, which made it a bit hard to pick out Bono in his black outfit at times, but overall things went fairly smooth.  The only hiccup was at the end of song three, where Edge and Adam Clayton come out on the extended walkway.  They were each supposed to take separate walkways, so I camped out at Adam’s walkway waiting for him and of course he ended up following Edge down his and I pretty much missed the shot entirely.  It was unfortunate, but not a big deal in the big scheme of things. 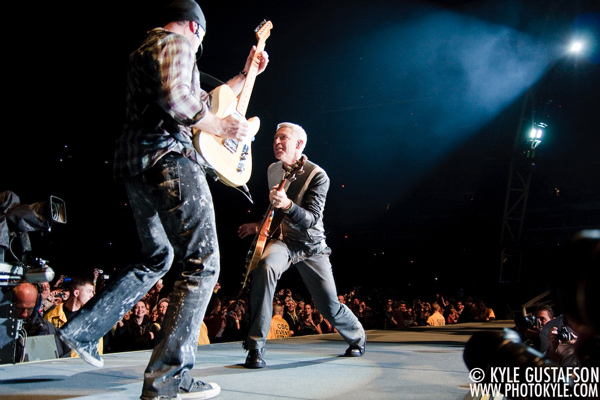 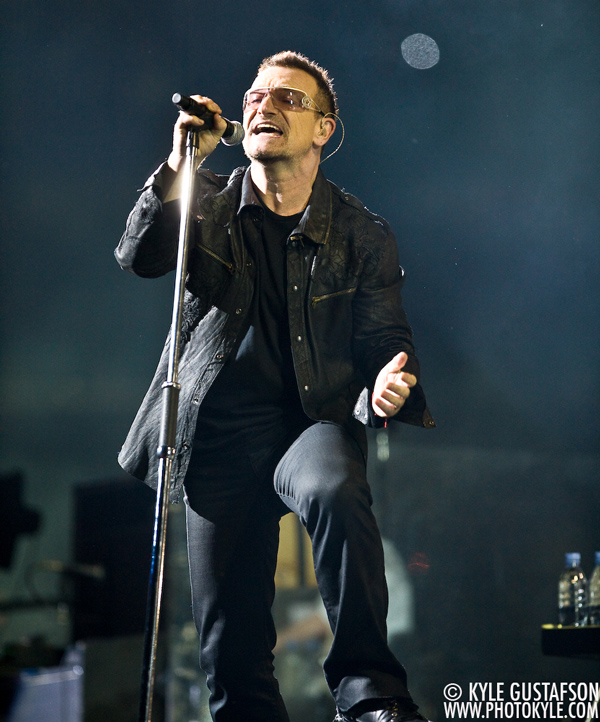 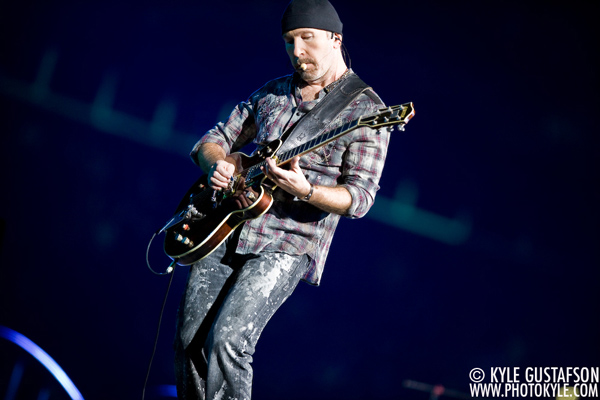 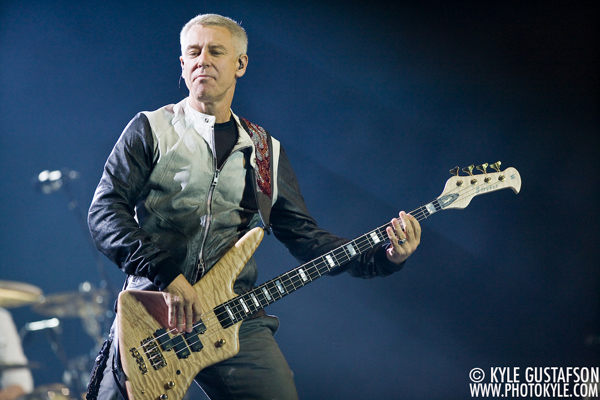 After I was done, I hightailed it out to my car to lock up my gear and then I went back in to watch the rest of the show. You can read my review and see more photos over on Washingtonian.com. 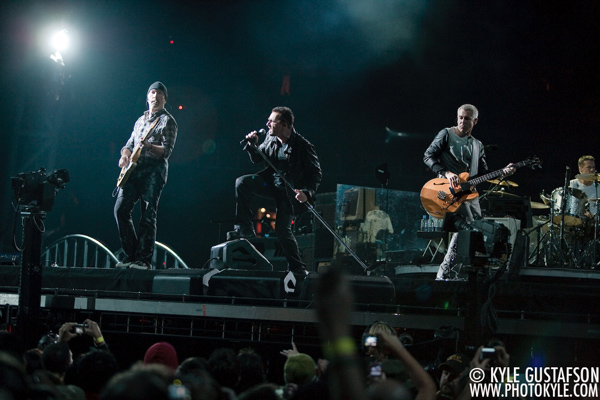 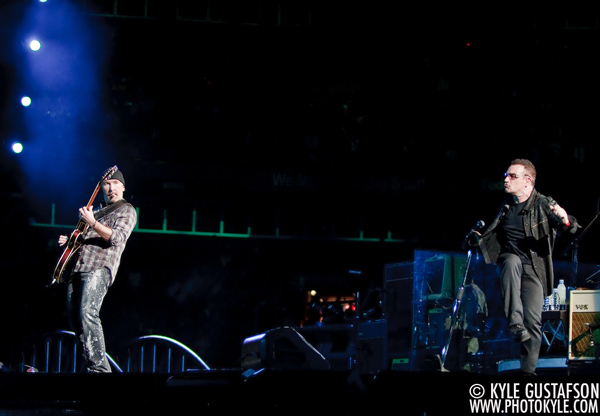 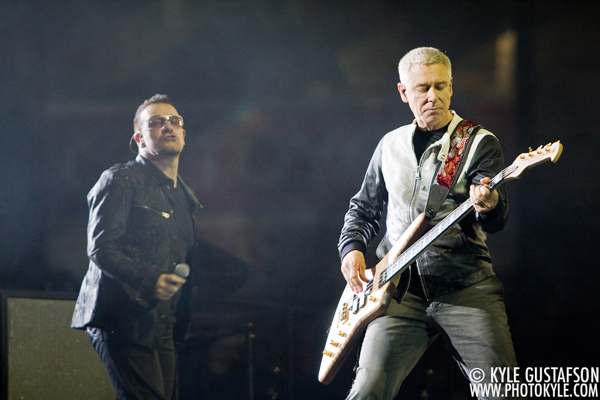 Muse opened the show and they were incredible.  I’ll have those photos up soon. 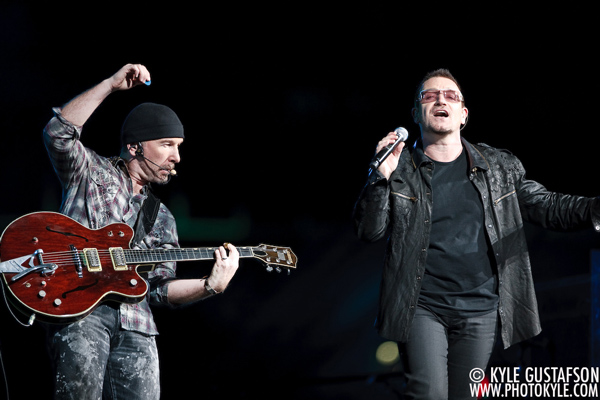 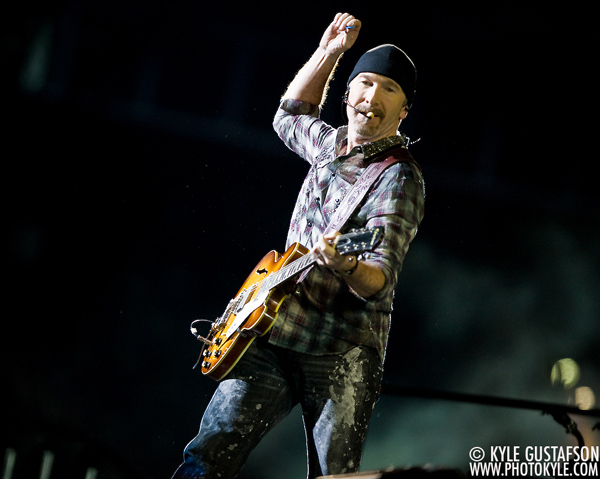 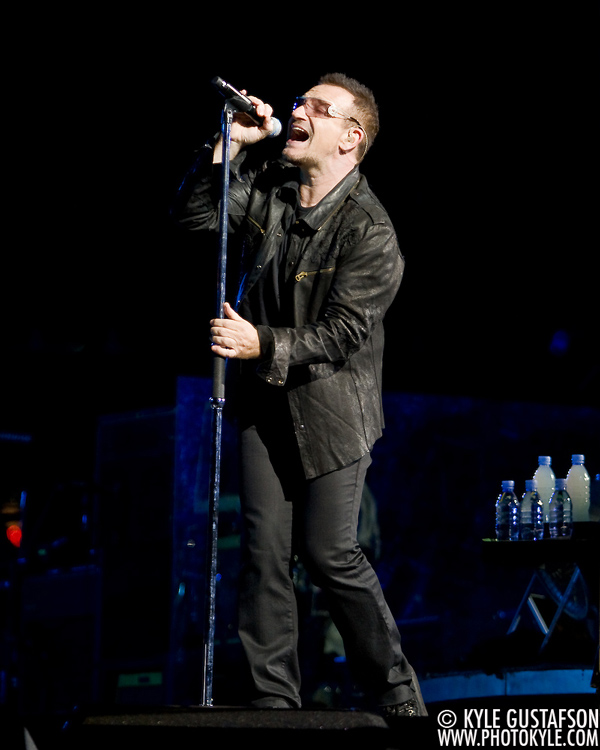