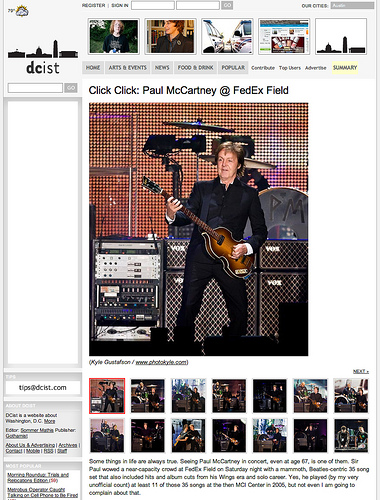 Last weekend I got to experience one of the biggest thrills of my photography career when I was given the chance to shoot Sir Paul McCartney during his show at FedEx Field in Landover, MD. This was also my first-ever stadium shoot, and predictably, it was pretty tough.

We were forced to shoot from the soundboard, which, obviously, was a LONG WAY from the stage. I rented a 400mm/2.8 and needed every bit of length from it on my Canon 40D. We were given two songs to shoot and although Sir Paul didn’t move from behind the mic stand very much, I was still pleased with my results.

The show was my also my first-ever trip to FedEx Field (where the Redskins play), although I will be back there this weekend for the D.C. United v. Real Madrd match and hopefully in September when U2 comes to town.

For legal reasons I cannot post any of my McCartney pictures here, so head over to DCist to see them all and to also read my concert review.

Grace Potter and the Nocturnals @ 930 Club